Charles was our sole representative at the championships, but he made up for a poor showing from Sutton by gamely entering both the foil and Sabre event and came a respectable 6th place in both. 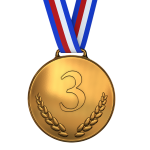 We would like to thank Charles Benke and Alex Smith for taking part in the Warwickshire county championship this year in the mens foil category. Alex has only recently started fencing competively and he gained a good result over the weekend. Charles however is an old hand at competitions showed everyone he still has some fire in him, battling to the semi-finals to gain a Bronze for Sutton Coldfield fencing Club. Hopefully this will continue the recent winning streak of silverware that the club has been gaining at regional level following the club’s emphatic victory in Novemeber’s Presidents Cup

Find out more about us