Sutton put a brand new team into the Presidents Cup this year (Claire on Sabre, Jack on Epee and Dan on Foil). They didn’t get a medal, but fenced well in each bout and can’t wait to take part next year (so they say!).

We didn’t win the cup this year. I can’t recall which position we did end up but here is a nice image of Julie Foster, Dave Cox and Tomas Kazik doing the honours for Sutton.

Sutton sent two teams to the 2015 Presidents Cup. We didn’t manage to win it this year, but out of 13 teams we did come second and equal third which is pretty darn good! And if you are being picky, technically we had more victories than the other third placed team, so let’s say second and third…. 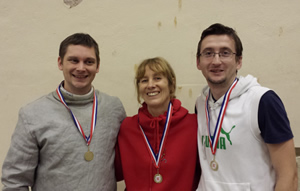 Gongs: Gold for Sutton Team A

We’ve got a good winning record in the Presidents Cup, long may it continue!

This year we came fourth out of ten teams

There was a record number of teams in the Presidents cup this year. Sutton entered just one team consisting of Ian Bullock (Epee), Dave Cox (Sabre) and Julie Foster (Foil). There were were lots of great fights and for a while it looked like we might retain our winning number one spot from last year but we were finally narrowly beaten by the Squirrels from Stourbridge.

Sutton Coldfield Fencing Club sent forth two teams for the Presidents Cup, a regional mixed weapon competition, and managed to carry away 1st place against eight other regional; teams:

Team B won the competition with the team working well together and beating all opposition that came their way, including a 15-0 thrashing of one of the BFC teams. This was a vindication for all the hard work and training drills that the fencing club has put in over the year.

Team A also performed strongly winning four encounters. Beth Stanton competed in her first competition as a foillist, and Ben Phillips pulled off the best feat in the competition by bringing the team back from an 8 point deficit to win their final match.

Julie Foster as the highest ranked female foillist in the competition won the regional Angela Roberts Trophy, an honour that she is no stranger to.

This is an excellent result for the end of the year and we hope that 2011 will bring us more silverware.

Find out more about us